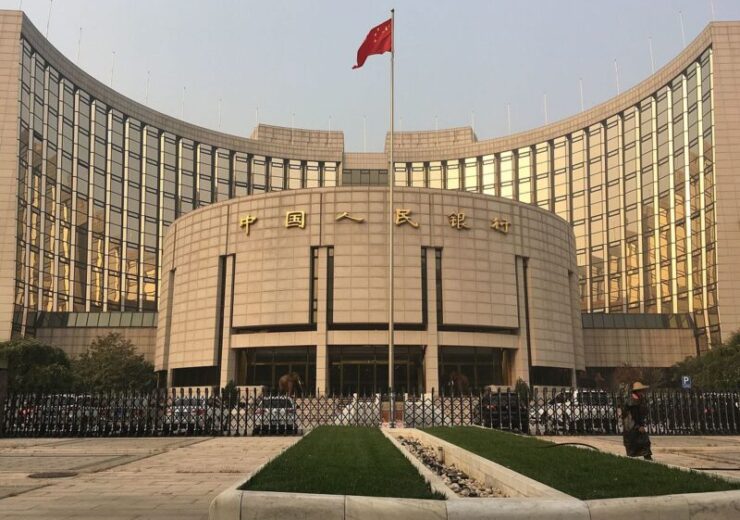 Headquarter of the People's Bank of China in Beijing. (Credit: Max12Max/Wikipedia.org)

The People’s Bank of China (PBOC) has injected CNY120bn ($18.6bn) into the country’s banking system in an effort to keep the liquidity stable at the end of the quarter amid the ongoing Evergrande crisis.

The Chinese central bank had carried out reverse repo operations of the said amount through interest rate bidding. The interest rate is 2.35% with the maturity period being 14 days.

The funds, which were provided by using a reverse repurchase agreement, will result in a net injection of CNY90bn ($13.93bn), reported Bloomberg.

DBS Bank Singapore senior rates strategist Eugene Leow has been quoted by the publication as saying: “The PBOC’s net injection is probably aimed at soothing nerves as the market worries about Evergrande.

“While the aim may be to instil discipline, there is also a need to prevent contagion into the real economy or to other sectors.”

However, Standard Chartered Greater China and North Asia chief economist Ding Shuang told the publication that the latest liquidity boost from the Chinese central bank will not be sufficient to address the Evergrande crisis.

Shuang has been quoted by the publication as saying: “What the market hopes the government will do is to come up with a plan that can help the company restructure and refinance in a smooth way.

“China’s bottom line is that it won’t allow the Evergrande issue to turn into a full-fledged financial crisis or let it trigger any systemic risks.”

Evergrande, which is a Chinese real estate developer, has a debt of more than $300bn. Last week, the company said that it could default on the debt, sending shockwaves across global markets.

One of the measures taken up by the company to address its liquidity issues is introducing new investors to its business.

Meanwhile, BlackRock, HSBC, and UBS have reportedly emerged as one of the largest buyers of Evergrande’s debt.

From January to August 2021, BlackRock had added 31.3 million notes of Evergrande’s debt to increase its stake in the latter to 1%, reported Morningstar.