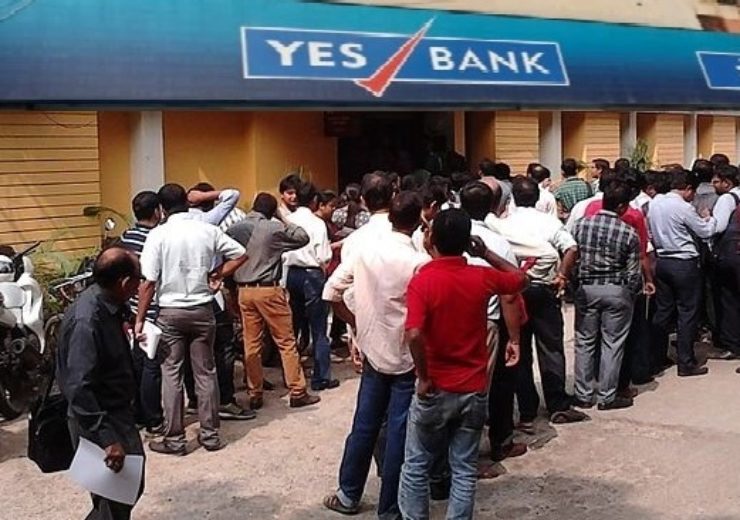 People queue up at one of the branches of Yes Bank in India. (Credit: Camonika2016/Wikimedia Commons)

The Reserve Bank of India (RBI) has reportedly chalked out a final revival plan for the troubled private lender Yes Bank, which is expected to ensure that there will be no issue of liquidity issue upon lifting the moratorium.

For this, the plan from the Indian central bank is said to include the capital to be infused in the private lender along with the funding lines, reported The Times of India.

In the coming days, the Reserve Bank of India is likely to disclose the specific investments to be made by the State Bank of India and other banks for bailing out the private lender.

Although names of the other banks that could take part in the equity infusion in the troubled bank were not revealed, it is likely that ICICI Bank, Kotak Bank, and HDFC among others have been asked for their interest in placing short-term deposits to bailout the private lender, as per the publication.

Last week, the Reserve Bank of India published a draft scheme of reconstruction for the troubled lender, which included a potential stake acquisition by the State Bank of India.

The private bank was placed under moratorium by the Indian central bank for not addressing possible loan losses and the subsequent deterioration in its financial position.

The Reserve Bank of India said that the reconstructed bank will have an altered authorised capital of INR500bn ($6.78bn) and the number of equity shares will be changed to 24 billion, priced at INR2 ($0.027) each, which total to INR480bn ($6.51bn).

The Reserve Bank of India indicated that the employees of the troubled bank will not be impacted by the reconstruction scheme.

The Indian central bank stated: “All the employees of the Reconstructed bank shall continue in its service with the same remuneration and on the same terms and conditions of service (T&C), including terms of determination of service and retirement, as were applicable to such employees immediately before the Appointed date, at least for a period of one year.

“Board of Directors of the Reconstructed Bank will however, have the freedom to discontinue the services of the Key Managerial Personnel (KMPs) at any point of time after following the due procedure.”