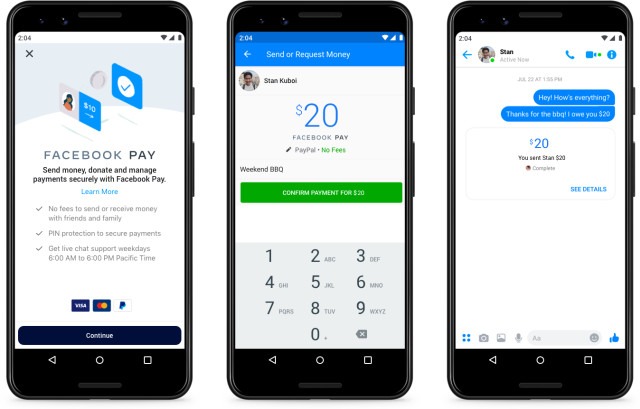 The social media company said that people already use payments across its apps to buy, donate to causes and for sending money to each other. Facebook Pay is claimed to make such transactions easier while ensuring that the user’s payment details are secure and protected.

The new feature will allow users to add their preferred payment method once and then use the interface to make payments and purchases on the company’s apps, rather than re-entering payment information each time.

Facebook Pay will be rolled out on Facebook and Messenger this week in the US for fundraisers, event tickets, in-game purchases, and person-to-person payments on Messenger and purchases from certain pages and businesses on Facebook Marketplace.

The social media company expects to launch the integrated payment feature to more people and places in the course of time, including users on the Instagram and WhatsApp platforms.

Facebook Pay will support most of the major credit and debit cards and also PayPal. Payments will be processed in partnership with PayPal, Stripe, and others across the world.

The new payment solution is built on existing financial infrastructure and partnerships, and is not related to the Calibra wallet which will run on the Libra network, said Facebook.

The social media company stated: “With Facebook Pay, we’re continuing to invest in security. We designed Facebook Pay to securely store and encrypt your card and bank account numbers, perform anti-fraud monitoring on our systems to detect unauthorized activity and provide notifications for account activity.

“You can also add a PIN or use your device biometrics, such as touch or face ID recognition, for an extra layer of security when sending money or making a payment.”

It was in July 2019 when Facebook announced its expansion into the financial services sector through the launch of the Calibra digital wallet. Set to be launched next year, Calibra is said to enable users make transactions through Facebook’s new global cryptocurrency Libra.