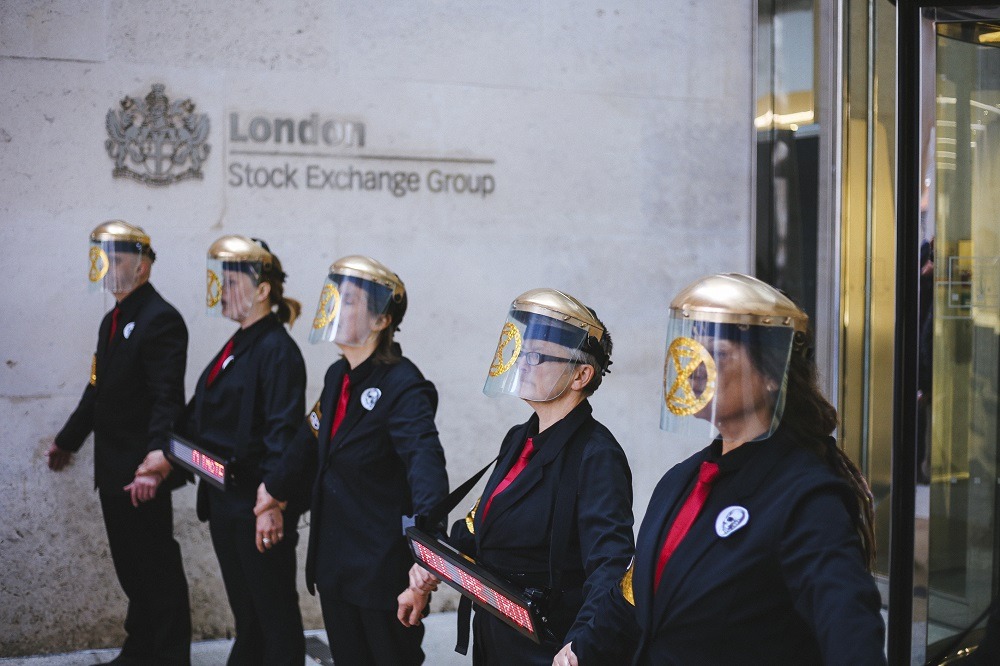 Extinction Rebellion climate change protesters in London turned their attention to banks and financial institutions in an effort to highlight claims of “corporate greed at the expense of the living planet”.

The protest movement, which has staged demonstrations throughout the capital all week to raise environmental awareness, targeted the London Stock Exchange, Goldman Sachs and HM Treasury among others yesterday (25 April).

Why is Extinction Rebellion targeting banks?

The protest group says the world’s top banks have facilitated £1.5tn in fossil fuel financing since the Paris Climate Agreement was signed in 2016, as well as billions of pounds going to projects that have ecologically harmful effects, like rainforest destruction.

An Extinction Rebellion statement said: “We implore the financial services industry to declare a climate and ecological emergency, and be part of the solution for halting biodiversity loss and achieving net zero carbon by 2025.”

“I would encourage them to demand their employers stop financing companies that risk the safety of their children and grandchildren, or they must consider themselves complicit.

“All businesses have to pick which side of history they want to be on.

“Do they facilitate the end of all we hold dear in the natural world, possibly even ourselves, or help to accelerate the transition to carbon-zero economies by rejecting further support for fossil fuel companies?”

More than 300 activists took part in the protests, which began in the morning with 13 people gluing themselves to the London Stock Exchange (LSE) to prevent people from entering.

The institution was targeted by activists who say some of the “most environmentally destructive companies in the world” have their stock listed there, including fossil fuel and mining businesses and palm oil producers.

Dr Sandy Biden-Hoskins, a 64-year-old archaeologist and one of the protesters who blocked the LSE, said: “The most important reason I’m doing this is for my eight and 11-year-old grandsons.

“I want them to have the same chance to enjoy the world that I have, not to be burdened, and to know that I didn’t sit by and do nothing.

“I hope governments around the world and the corporate people who have the power to make the changes to protect our world, do so.”

Each of these companies, Extinction Rebellion claims, is directly implicated in climate change due to the funding of fossil fuel or other environmentally harmful projects.

Later in the day, the protesters made their way to the UK Treasury, where seven people glued themselves to one another in front of the building demanding the government department “tell the truth” about its role in funding climate change with taxpayer money.

With yesterday’s news that the government is searching for a replacement for Bank of England governor Mark Carney, the Extinction Rebellion campaign has called upon to take the opportunity to “put the climate emergency at the heart of government financial policy”.