Bernard Gavgani, group CIO at BNP Paribas, explains why the global bank is first in line to embrace digitalisation. 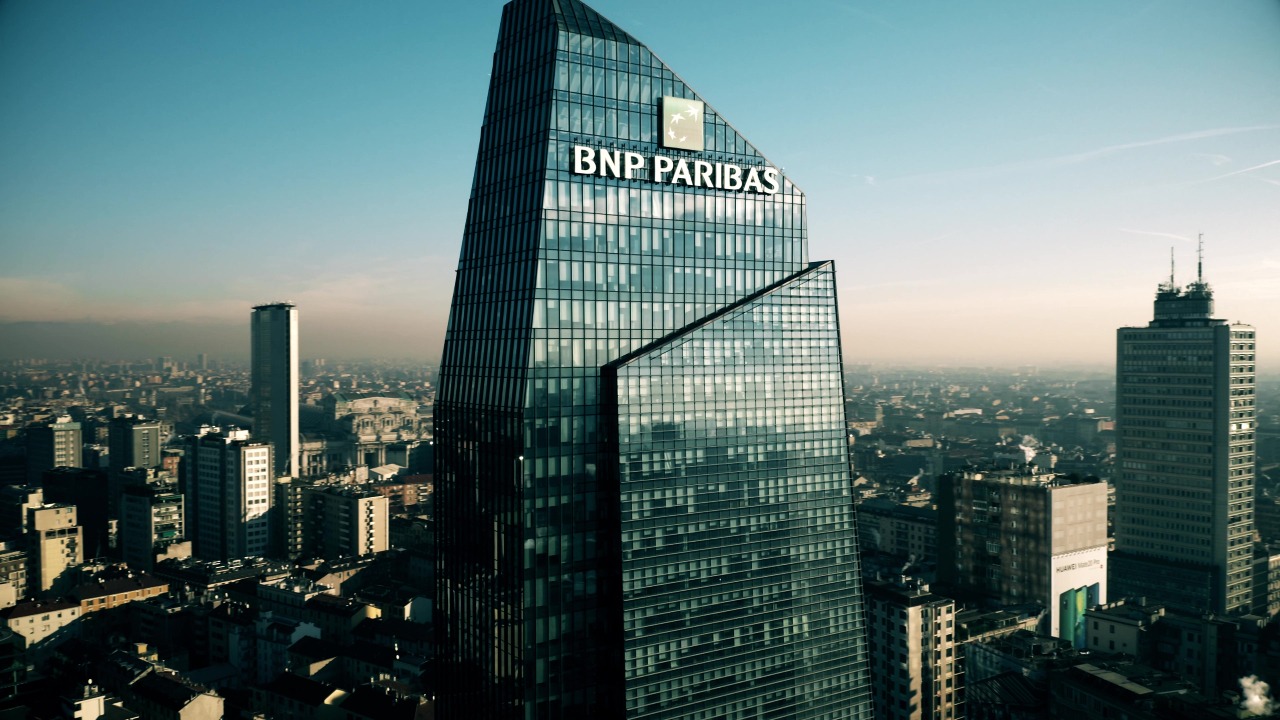 BNP Paribas joins other banks in the march towards digitalisation. (Credit: Novikov Aleksey/Shutterstock)

Every bank is rushing to embrace the latest technology – but few have such a storied history at being first as BNP Paribas. From its origins in the 19th century, the French multinational has always been willing to experiment with what’s new. Not that the path to a digital tomorrow is totally clear.

Getting customers and staff comfortable with new systems is one challenge, as is the perennial struggle of keeping clients and their information safe. Andrea Valentino chats to Bernard Gavgani, the group CIO at BNP Paribas, to learn more.

In the shadow of Napoleon and in an age of absolutism, BNP Paribas was born as something new. Known in the 1820s as the Société Générale de Belgique, this predecessor of the modern giant combined retail banking and shareholdings in companies for the first time, thereby inventing mixed banking. It didn’t stop there. Though it’s passed through many mergers and countless names, the French multinational has always been in search of what’s new.

In the 1890s, the three banks that would one day form BNP funded vast new railway projects in China. In the 1960s, it promoted innovative bank cards – and even advertised specifically for women. To put it another way, this is an institution that’s always faced the future with pride. And given how quickly finance is advancing, that’s just as well.

Think about it: this is a world where digitalisation is expected to jump by 16.5% every year to 2025, and an industry where AI-oriented fintech will grow by over 20%. That’s doubly true, of course, in the wake of the pandemic. With many millions of customers trapped at home for over a year, 2021 could be the moment that remote banking finally enters the mainstream. That’s certainly what banks themselves have found. At Goldman Sachs, for example, 25% more customers are now using the bank’s institutional platform than before coronavirus. Across the sector generally, this figure climbs to over a third.

Naturally, the path towards an efficient and profitable digital future is far from smooth. From security worries to training staff, there’s a metaphorical Mont Blanc to climb. Yet if anyone has their crampons on and their boots tied fast, it’s Bernard Gavgani. The group CIO at BNP Paribas since 2018, Gavgani has followed his industry’s march towards digitisation for decades.

More to the point, he’s now pushing a number of exciting innovations from his Paris headquarters. From cloud support to digital assistants, each has the potential to revolutionise how his bank does business. For that to happen, however, Gavgani is finding that he, too, has to change. Like so many of his peers, that means escaping the CIO’s traditional wheelhouse – and taking a more central role in his bank’s future.

A night to remember

Though he joins our conversation a few minutes late, Bernard Gavgani is quick to reassure me that he’s happy to chat for as long as I need. “Now I’m with you,” he says, “we can continue until midnight!” He’s joking, of course – but given how much there is to get through, it’s not a totally outlandish offer.

Over the past few years, indeed, BNP Paribas has revolutionised its technical offering. Just run through the list. In February 2017, it earmarked €3bn for digital transformation. In September 2019, it released a single dealer platform with an inbuilt digital trading assistant.

In July 2020, it announced it was adopting IBM’s Cloud for Financial Services. That’s trailed by more recent innovations, including partnering with Orange Business Services to update the communications network at 1,800 bank branches across France.

Yet listen to Gavgani talk and it’s clear that his bank’s journey to the digital uplands began far earlier than 2017. “To understand these changes, we have to look at the story – which I can maybe start from at least 2000,” Gavgani explains. “The bank’s first transaction website began around that time to meet our audience with the growth of the internet.”

From there, the CIO continues, BNP Paribas kept up with the innovations of the age, with call centres, ATMs and mobile phones all entering the bank’s arsenal. Even so, it initially proved tough to convince brick-and-mortar branches that they weren’t in complete competition with the new channels, while customers themselves struggled to understand what a new app or service could actually do for them.

That ultimately led to a brand new campaign, launched in 2016, which aimed to bring customers aboard. “It was an attempt,” says Gavgani, “to overcome the limitations of the previous model by working with customers to focus on their experience, rather than highlighting the bank process.” The latest iteration of this principle, being rolled out over the next few years, has a similar aim: to fully develop banking-as-a-service (BaaS) across BNP Paribas.

The French firm is far from alone here. Across the Pyrennees, for instance, Spain’s BBVA now offers a number of digital services. That covers everything from moving money to creating new accounts. In London, meanwhile, Standard Chartered recently launched its own BaaS platform. Known as ‘nexus’ – the lack of capitalisation is trendily deliberate – it’ll allow digital platforms to offer customers loans, credit cards and saving accounts.

With all this activity, you might imagine that BNP is cultivating its own digital garden to keep up with the competition. Gavgani disagrees. Instead, he says that customers themselves are eager for change. “Any bank that isn’t digitised nowadays isn’t lost because of competition, but because of the customer – they don’t want to continue to stay with them.”

That claim is certainly supported by the numbers. Though coronavirus has whipped digitalisation from a trot to a gallop, the years before 2020 already saw an increase in support for new financial technology. One 2019 survey, for instance, found that a fifth of millennials with a loan used an online lender. That’s a 1.5 times increase on 2018.

The same survey also found that just 61% of people expect their bank to have a physical presence on the High Street, down from 65% the year before. This enthusiasm is especially sharp in developing countries. In Ukraine, for example, where BNP owns a subsidiary, Ukrsibbank, cashless payments have jumped by 23% in just four years – an emerging pattern that national and global banks agree would be foolish to ignore.

Ahead of the Curv

When it launched in 2019, Cortex Life was heralded as something excitingly new. Described by BNP Paribas as an industry first, the single dealer platform allows traders to seamlessly buy and sell everything from bullion to emerging-market currencies. Even more striking, though, is Cortex’s digital assistant. Known as AliX, it offers clients a running commentary on execution and trading, as well as important events like market wobbles or changes in liquidity.

AliX manages all this by reacting to over 100,000 data points every second, meaning even frazzled financiers can make decisions quickly. Gavgani, for his part, says Cortex and AliX are a “one-stop shop” for business clients of all types.

“It speeds up daily tasks, such as pricing complex options versus traditional methods,” he adds.

Nor is Gavgani and his team stopping there. Rather, Cortex and AliX are the short end of a far broader wedge – one that ultimately promises to reach every corner of BNP Paribas’ business. As an example, Gavgani describes BNP Paribas Securities Services’ partnership with Curv, a cloud-based digital asset security infrastructure.

In simple terms, the system uses private keys and multi-party computation to ensure that transactions are signed securely. But though this technical wizardry is certainly impressive, Gavgani returns to the lodestar that’s guided BNP’s digital transformation since 2016 – listening to what customers actually want.

“One of our primary objectives with this initiative is to allow our clients to continue to benefit from the efficiencies of their existing operating model for traditional assets,” he explains.

“We will provide them a consolidated service covering both traditional and digital assets – allowing them to leverage the same communication channels they have with us today along with a consolidated account structure across both types of assets. As we are still in the very early days of institutional investments in digital assets, our short-term objective is to lay a solid foundation to be able to service our clients once they are ready to invest in these new types of assets.”

This focus on keeping the customer happy extends to retail consumers too. Lyf Pay, for instance, is a free mobile payment app that centralises customers’ cards, coupons and loyalty cards in a single place. BNP even lets them connect to other financial institutions. It goes without saying, says Gavgani, that all these successes have forced BNP Paribas to take a sensitive approach – nudging customers towards a digital future he’s convinced can help everyone.

“It makes sense to help clients move from one technology to the other, ensuring that the legacy technology is used less and less.” The same could be said of the bank’s own workers, embarking on their own digital adventures. Appropriately known as SEARCH, this specialised search engine collates everything staff need to know in one spot.

Making these internal schemes successful needs work. For one thing, says Gavgani, the bank hunts for the most promising young boffins, and shepherds them through the ranks via mentorships and graduate schemes. For another, BNP organises courses for older staff to keep them abreast of new developments, training around 300 each year.

As Gavgani notes, 50% of what a tech graduate learns at university will be irrelevant in just five years. Beyond personnel, another major challenge is keeping these new digital platforms safe. That’s doubly true for Gavgani, who says that security should be an “obsession” for CIOs the world over.

It’s unsurprising, in other words, that his bank has over the years developed a comprehensive security team – and the technology to help. If, for example, the AI spots a certain account acting suspiciously, it’ll immediately inform the bank.

Between proactive security and constant training, it’s clear that Gavgani and his team are building the foundations of a robust and durable digital infrastructure. More than these institutional moves, however, Gavgani says he’s had to rethink his own role at BNP Paribas.

“I think that the role of a CIO has completely changed”, he says, suggesting that the shock of the pandemic has forced the profession to broaden its outlook. “The role of a CIO today is matching technical skills with business performance. This is why IT is becoming increasingly essential – specifically in the bank and for our customers. Tomorrow’s banks will be digital, and engineers will be part of the business to build new products.”

This is already happening at BNP. Putting data up into the cloud – and then using it intelligently to help clients – are the two pillars of what Gavgani describes as the destiny of his bank. This is undoubtedly part of a broader trend. At HSBC, for instance, a new API now lets businesses understand their cash flow and automate operations.

At Barclays, the so-called ‘Smart Investor’ platform uses elegant UIs and automated data analysis to make transactions simple. No wonder, then, that Bernard Gavgani devotes so much time to these technologies himself, spending two days each week working on the latest cloud and AI platforms. “I know that this is the future,” he says. “We cannot – and have no right to – miss this transformation.”

Given his bank’s form, he probably shouldn’t worry. For two centuries, BNP Paribas and its predecessors have already shown just how successful embracing change can be. And anyway – you get the feeling that Gavgani is happy to work past midnight to make it happen.