Data centres and the carbon footprint

Leaders in cloud services and emerging technologies explain the trade off between large data centres and reducing our carbon footprint. 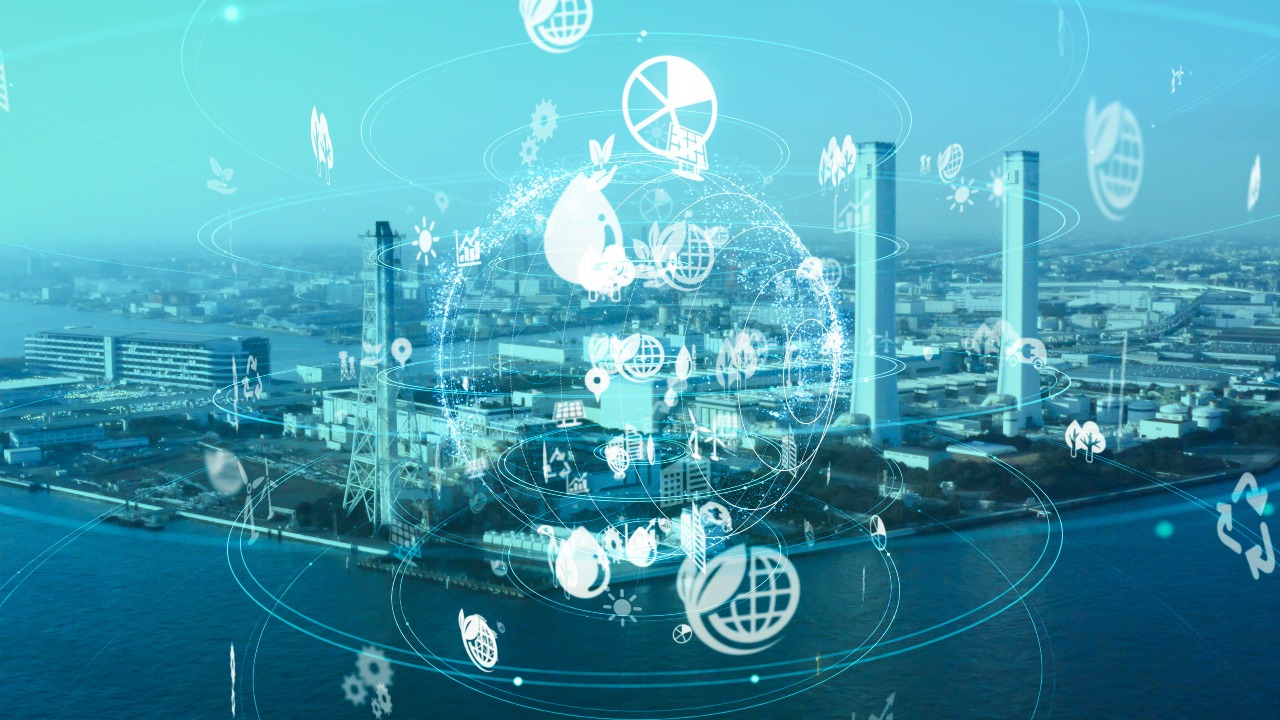 Data centres grow larger and more numerous with each passing year, reflecting growing demand for digital services and online content. The power consumption of the energy-hungry server racks that feed our data needs is causing concern about carbon emissions.

Jim Banks speaks to Ian Haynes, HSBC’s head of global cloud services, and George Kamiya, emerging technologies analyst at the International Energy Agency, about how to manage the carbon footprint of data centres.

The world’s appetite for data grows stronger each day, as consumers rely more and more on internet-enabled devices – and industries of all kinds rush towards digitalisation. According to the International Energy Agency (IEA), since 2010, the number of internet users worldwide has doubled, while global internet traffic has grown twelvefold.

Consequently, the world’s data centres are becoming much larger. Hyperscale data centres – defined as those with more than 5,000 servers and occupying more than 10,000 ft2 – are quickly becoming the norm rather than the exception.

It seems safe to assume, therefore, that as more server racks handle more data traffic, we can expect a significant hike in power consumption – in turn leading to an unwelcome rise in carbon emissions. Making assumptions, however, can often be unwise.

If we look back just ten years, estimates suggested that the world’s data centres barely caused a blip on the graph of global power consumption. Since then, extrapolating their energy demands in line with the growth in the world’s data centre estate has led some to draw worrying conclusions, with one study suggesting that more than 3% of all the world’s power demand comes from internet-enabled devices and data centres. That translates to 2% of global greenhouse emissions.

Such conclusions have, however, been refuted by no less an expert than the IEA itself, which observes that while energy use from data centres did grow rapidly in the early 2000s, they still currently consume just 1% of the world’s power – or around 200TWh of electricity annually. To put that in context, the UK as a whole consumes just over 300TWh each year.

“Carbon emissions from data centres globally are probably decreasing, since data centre electricity use has been flat while the overall electricity grid is decarbonising,” says George Kamiya, an emerging technologies analyst at the IEA. “Over the past several years, tech companies have also been buying a lot of renewable energy through power purchase agreements [PPAs]. But there is certainly more they can do to fully decarbonise their operations and supply chains.”

For banks, which are heavy users of data centres –either owning and operating their own server farms or choosing to hand the reins to cloud services – being a part of this positive trend remains a key factor in their decision-making process.

HSBC, which not only has its own large data centre estate – but also works closely with Amazon Web Services (AWS) – proves this point neatly. “We consider our cloud journey to be ongoing and we will continue to migrate data and workloads to cloud when it  makes financial and business sense to do so,” says Ian Haynes, HSBC’s head of global cloud services.

“While we will do our best to avoid growing the footprint of our data centres, we continue to invest to maintain the best-in-class standards for security, resilience and sustainability that our business demands.”

HSBC has made a Global Carbon Net Zero pledge and is focusing on achieving the highest standards of power usage effectiveness (PUE), which alongside data centre infrastructure efficiency (DCIE) is a widely accepted benchmarking standard for monitoring the impact of energy efficiency practices.

“Energy efficiency and sustainability are hugely important for HSBC,” Haynes emphasises. “In 2020, we achieved our stated aim of reducing PUE to below 1.5, from our 2011 baseline of 1.9. A PUE of 1.5 means that for every $1 spent on powering hardware, $0.50 is spent on cooling and ancillary infrastructure. A PUE of below 1.6 would be considered best-in-class.”

The efforts banks are making to control energy consumption and, consequently, to reduce carbon emissions, are part of a broader global effort by large technology companies and providers of cloud services – not least Amazon, Google and Microsoft, which between them own and operate a large proportion of the world’s hyperscale data centres.

A 2020 study authored by, among others, Eric Masanet, professor of engineering at Northwestern University, shows that data-intensive technologies, including artificial intelligence, are driving the rapid increase in demand for capacity in the data centres – the information backbone of a digitalised world. It also shows, however, that energy consumption does not rise in direct proportion to data centres’ capacity.

Masanet’s analysis shows that while data centre demand has grown 550% in the past eight years, the energy needed to power those data centres only grew 6%. The underlying reason is the effectiveness of energy efficiency initiatives undertaken by data centre operators.

“Concerns about the rapid growth in energy use and emissions stem from a few misconceptions,” explains Kamiya. “Firstly, the idea that the internet must have a large energy and carbon footprint because of its importance in our daily lives and the overall economy. In reality, data centres account for about 1% of global electricity use, and an even smaller share of greenhouse gas emissions.

“Secondly, some might think that because internet traffic is growing, its energy use and emissions must also be growing. This is not how most internet infrastructure works, and energy efficiency in data centres and data transmission is improving rapidly.”

A further misconception comes from extreme claims in the media, including the notion that the internet will consume a fifth of the world’s electricity a decade from now. These reports tend to cite the ‘worst case’ results of outdated studies that often underestimate energy efficiency progress.

“That doesn’t mean we shouldn’t worry about energy use growing in the future as data demand continues to rise,” adds Kamiya. “We need companies and governments to invest in R&D today so that we have more efficient technologies in five or ten years.”

Undoubtedly, the Big Tech companies will have the biggest impact on energy use and carbon emissions, but banks are also investing in technology to bring down PUE. “Reducing our carbon footprint in data centres is typically about improving our cooling efficiency,” says HSBC’s Haynes.

“This includes processes and equipment that take more advantage of external cooler air, controlling air flow more effectively around our buildings and use of smarter control units and variable frequency drives to ensure cooling responds as workloads change, such that we don’t overcool. Additionally, it is also about ensuring we rigorously remove or switch off infrastructure that is no longer needed.”

Immersion cooling is one technology that is having a dramatic effect, explaining its popularity across banks. As the power densities of servers grow, there could come a point at which air cooling is no longer effective in dealing with the heat generated by chips.

For example, French bank Crédit Agricole recently completed a two-year immersion cooling pilot project and is now preparing to roll out Asperitas’ take on the systems across its data centre portfolio. The Asperitas modules, built in-house by the Dutch company, encase the servers, immersing them in a cooling liquid that absorbs the heat from the hardware. This liquid conducts heat better than air, so can better handle the growing density that data centres require to cope with computationally intensive applications.

“The immersion cooling solution allows us to increase the density of our data centre without major work,” noted Jean Buet, senior officer, head of data centres at Crédit Agricole on concluding the deal. “We can thus offer our customers a high-thermal density solution that meets both their growing demand and the new technological challenges that appear with the new generation of IT equipment.”

In the initial trials of technology, indeed, the bank saw PUE decrease from 1.4 to 1.03 in
the winter and 1.04 during a heatwave. This compares to a PUE of 1.11 at Google’s large-
scale data centres. To put it another way, it’s an improvement that could see data
centres dramatically reduce their collective carbon footprint.

Carbon control in the cloud

For banks, technology will help reduce energy consumption and carbon emissions, but operational measures are also fundamental to the industry’s sustainability drive. ING is among many banks looking to consolidate their data centre estate to maximise economies of scale and improve sustainability. The bank is currently closing local data centres and rehousing data in its core data centres and private cloud infrastructure in Amsterdam. This is first and foremost a cost- and energy-efficiency play.

ING, HSBC and others are also partnering with cloud services providers to manage their data needs, improve service, and, of course, save money. “HSBC’s strategy is to make use of public cloud to achieve levels of performance and agility which cannot be achieved on-premises,” says Haynes, “and to adopt a flexible cost model for the benefit of customers, all without compromising on the high levels of security and resilience that our business demands.”

Sustainability nevertheless plays a key role in cloud services contracts. The likes of Amazon, Microsoft and Google are, Kamiya says, making great efforts to lower emissions. “New digital technologies and applications could have positive or negative effects on energy use and emissions,” Kamiya observes.

“Because there are so many indirect effects, estimating the net effects of digital technologies is extremely difficult. Digital technologies are not a silver bullet for tackling climate change, but strong climate policies and corporate action can help guide their application in the right places to accelerate clean energy progress.”

Concerns over carbon emissions from data centres are often overplayed and exacerbate concerns to an unnecessary extent, but there is no excuse for any technology-intensive industry to become complacent – least of all for one as tech savvy as banking.