A new age of digital transactions at Commerzbank 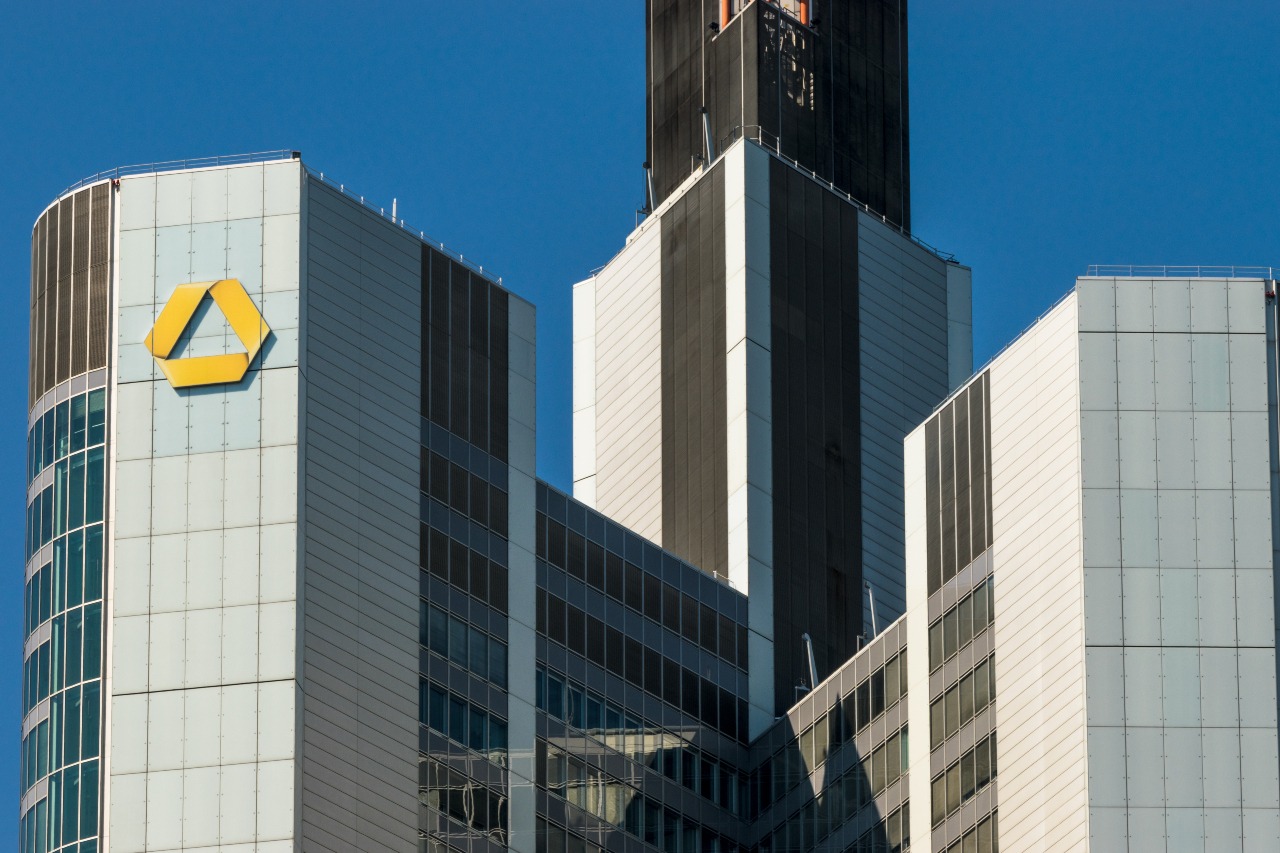 Payments are changing. With application programming interfaces (APIs) and apps transforming how we do transactions – a trend spurred on by the pandemic – more and more banks are embracing payments at the click of a button.

Important, too, is a more tolerant customer base. But what do these transformations actually look like at a specific financial institution? And how are digital payments boosting both users and the banks themselves? Andrea Valentino catches up with Christoph Berentzen at Commerzbank to learn more.

You can appreciate how primitive banking payments once were simply by examining that single word: banking. It comes from the Italian banca, and once described the wooden tables, or banche, where medieval Florentine moneylenders organised their pouches and piles of coins. If you wanted a loan, you simply went up to one of the tables and collected however much you needed.

And if your banca of choice had overextended, losing you your florins or ducats, it was supposedly broken in front of the hapless merchant – the origin of our modern word ‘bankrupt’. Clearly, banks have changed enormously since that lost Europe of spice trades and religious ferment. But the way people made payments, to their bank or anyone else, remained static long after the Medici flittered into the history books.

Rudimentary credit cards were being used by the 1920s, but even by 1946, the ‘Charge-It’ card could only be charged locally. The ATM, for its part, only appeared in its modern form in the 1970s – and even then progress was slow. As recently as the new millennium, just $1.2bn of American purchases were done by card. That might sound like a lot, until you realise it’s less than a quarter of today’s figure.

How, then, to explain the situation less than two decades on, where the world of payments has been utterly transformed? One where the digital payments sector is worth over $5.4trn? One where, if the statisticians are to be believed, 6.1 billion people – that’s over three-quarters of the global population – might be using digital payments by 2023?

There are many answers to these questions, from worries around social distancing to exploiting new technology. Ultimately, though, it can all be understood by something far more modest: demand. With customers finally becoming comfortable with the power of open banking, they’re leading a revolution in the way banks offer services.

Not that embracing digital payments is always easy. From difficulties around collaboration to legal questions, getting to a world where 76% of humanity pays for coffees and shopping and nights out via their smartphones is far from simple.

Yet by encouraging collaboration between traditional institutions and third-party fintech companies, and working to connect commercial and retail customers, banks are proving every day just how much can be done to smoothen the road ahead. It goes without saying that this has colossal implications for banks, their staff, their consumers – to say nothing of the businesses that actually serve them.

You don’t get a pay

By the standards of some of their neighbours, Germans have taken to digital payments cautiously. Just three years ago, researchers at McKinsey reported, cash still accounted for two-thirds of consumer-to-business transactions in the Federal Republic. That contrasts to places like the Netherlands, where 56% of transactions are done online.

The situation further north, for its part, is even more impressive. In tech-savvy Sweden, for instance, the government has encouraged citizens to embrace digital payments in all their variety. These days, just 15% of Swedish consumers now prefer to use cash compared with cards or apps.

To put it another way, when Christoph Berentzen joined Frankfurt’s Commerzbank, he had his work cut out. Arriving in 2018, he discovered he was developing the institution’s API essentially from scratch; work that’s only intensified since he became Commerzbank’s head of API in January 2020.

A tough ask – yet listen to Berentzen talk and it becomes clear that offering new digital solutions to customers was absolutely crucial to Commerzbank’s future prosperity. “Customers want to do banking and payments any time, any place and with any tool,” Berentzen explains, “so banking needs to be integrated in business processes outside the bank. In order to keep their relevance, banks need to enhance their solutions and extend their customer reach.”

Even for a risk-averse country like Germany, this claim rings true. According to one recent poll, after all, nearly 30 million of Berentzen’s countrymen and women will have digital bank accounts by 2025 – enthusiasm shadowed across the continent.

In Hungary, for instance, the number of accredited fintech providers increased by 25% in the first quarter of 2020 alone. And even in those countries that saw less dramatic growth, like Liechtenstein and Malta, you can still find at least 60 similar companies. This is echoed, too, by work at specific banks. HSBC, Barclays and UniCredit are just a few of the big European banks to have jumped into payment APIs over the past few years.

What explains this shift? One reason, surely, is coronavirus. With social distancing the order of the day, why would you handle grubby coins, or hand over your debit card to a gloveless stranger, when you can easily make payments with a swipe or a click?

According to work by Plaid, one of the brightest stars in the fintech firmament, 60% more Americans are using fintech products than before the pandemic. In the European context, meanwhile, new legislation has spurred on innovation.

Passed by the European Union a few years ago, Payment Service Providers Directive 2 (PSD2), obliges banks to open their payment services to other companies – and lets consumers add their bank account details to other platforms.

These legal tweaks have boosted technological innovation. An example comes from Germany, where N26, a neobank based in Berlin, has seen its customer base skyrocket to around 2.5 million users (up from barely a third of that in 2019).

But though he concedes that PSD2 forced banks to “do the groundwork” for more exciting products and was reasonably important in building public awareness in fintech, Berentzen suggests that market demand was ultimately the key driver. “Customer demand is crucial for change – in line with API technology – as the missing link and necessary foundation for data exchange.”

What does establishing a banking API from nothing actually look like? Perhaps surprisingly for an industry characterised by hipster programmers and Wild West investors, Berentzen says that Commerzbank’s foray into fintech has been characterised by caution and careful planning.

“Commerzbank identified the business potential of API technology early, and leveraged internally first,” he explains. “Then we opened-up step-by-step to connect with others and to participate in the ecosystem game. Technology, paired with customer-centric thinking, were key for us.” Certainly, look at what Commerzbank has going and this focus on clients shines through.

That starts with the bank’s Corporate Payments API. Apart from letting businesses transfer payments directly out of their own enterprise resource planning (ERP) systems, it also helps them receive status information in return.

The same principles apply to the bank’s Instant Payments API, which allows clients to submit payment orders and get confirmation messages almost instantly, particularly useful for businesses where speed is of the essence.

At the same time, both the Instant Payments and Corporate Payments systems include automated data transfer processes and seamless integration with third-party platforms – with the ultimate aim of making payments cheaper, simpler and more effective.

That’s true for the clients themselves, of course, but Berentzen is keen to emphasise the benefits of his APIs to his employer too. For one thing, seamless service boosts the number of payments done via Commerzbank. For another, it keeps customers happy.

Combined with a reduction in the time staff spend dealing with data inconsistencies, the bane of manual file transfers everywhere, and no wonder Berentzen says that automation comes with “mutual benefits” for everyone involved.

Given all the advantages of APIs, indeed, it makes sense that many other banks are hopping aboard. In London, for instance, Barclays is developing a host of different platforms, covering everything from accounts to transactions. Across the Channel, meanwhile, ING has tested an API that lets customers see the status of their bank guarantees in real time.

All this is shadowed by broader developments in how payments are done. A prime example here is Banco Sabadell, which recently announced that it would soon let business customers make payments from its website – even while using accounts held in other financial institutions.

Whatever the specifics, collaboration with fintech is the watchword here, with many banks using PSD2 to offer data up to improve their own offerings. Indeed, banks are also increasingly happy to work with external partners in a number of areas.

Last year, for example, Deutsche Bank announced a major deal with Airwallex, an Australian payments firm. Among other things, Airwallex plans to use the German bank’s foreign exchange services and integrate them via an API into its own offering.

All the same, admits Berentzen, this same spirit has struggled to permeate between rival banks. A major difficulty, he says, is the “lack of standards in API development” that can make it hard for companies to integrate into wildly different platforms.

Commerzbank, however, is battling to make things simpler. By working through the so-called Berlin Group – a collection of around 40 European financial institutions – Berentzen and his team hope to promote greater API standardisation. Other challenges are on his radar too. With fraud a constant danger, he says that improved infrastructure monitoring is helping keep payments safe.

That’s bolstered, he adds, by better technology. One solution is to promote state-of-the-art workflow authorisations. Another is using payment order approvals like PhotoTAN. Designed by Commerzbank, it involves scanning a special coloured graphic with a smartphone app or specialised reader.

For Berentzen, this sort of wizardry isn’t just important for customers, it’s absolutely vital to Commerzbank’s reputation. As he puts it: “Customer trust is the biggest asset of a bank, as well as a key differentiator to other payment providers.”

With so much activity, what might the future of banking payments look like? Berentzen, for his part, is optimistic. Once again pointing to the power of the market, he suggests that payments are likely to become increasingly more request-based and on demand. That’s true, he adds, even for corporate banking.

Though it’s traditionally been less polished than its retail cousin, developments like Commerzbank’s Corporate Payments API speak to a world where businesses can make payments easily and comfortably. What is certain at any rate is that we’ll soon be as far, technically speaking anyway, from that ancient world of credit cards as the 1980s was from the banche of Siena and Pisa. About time too.